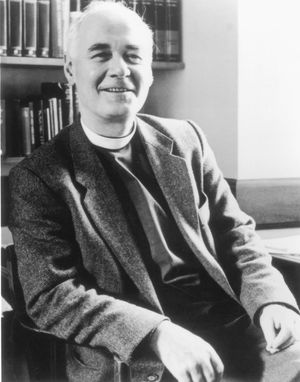 Earlier this month, John Polkinghorne passed away. He was an Anglican priest, theoretical physicist, and theologian. I was introduced to his work far too late in my life and have so much of his writings to catch up on, but the little I have read continues to inspire me.

I often feel caught in the middle of the modern world’s war between science and religion. Sometimes finding myself more on the side of science and other times the opposite, but always in-between. I cannot seem to satisfy my curiosity by limiting myself to either the how or the why? Both are equally valuable.

I grew up in a Christian tradition that valued a formulaic approach to “the Gospel,” a system of salvation that relied on every detail to be exact and unrelenting. It was a house of cards built on a specific idea of Biblical inerrancy. For most of my childhood, it seemed like a well-built house. As I grew older and fell in love with the wonder of the universe, cards began to fall and I found myself scrambling to hold the structure of my childhood faith in place.

Polkinghorne spent a considerable amount of his career trying to mend the fast-growing tear between religion and science, arguing that both are valuable lenses through which we view reality. I wonder, had I been introduced to thinkers like him earlier in life, would I have struggled so deeply with the depression and inner conflict that arose out of the attempts to save my house of cards.

A couple of years ago, I participated in a reading group that discussed an essay of his about creation. Below is the opening excerpt from that essay. It comes from a collection called The Polkinghorne Reader, edited by Thomas Jay Oord. I like to think of it as Polkinghorne’s take on Genesis Ch. 1.

If you find yourself inspired to read more Polkinghorne, perhaps we can do it together. Reach out and let’s celebrate his life and work.

In the beginning was the big bang. As the world sprang forth from the fuzzy singularity of its origin, first the spatial order formed, as quantum fluctuations ceased seriously to perturb gravity. Then space boiled, in the rapid expansion of the inflationary era, blowing the universe apart with incredible rapidity in the much less than 10-30 seconds that it lasted. The perfect symmetry of the original scheme of things was successively broken as the cooling brought about by expansion crystallized out the forces of nature as we know them today. For a while the universe was a hot soup of quarks and gluons and leptons, but by the time it was one ten-thousandth of a second old, this age of rapid transformations came to a close and the matter of the world took the familiar form of protons and neutrons and electrons. The whole cosmos was still hot enough to be the arena of nuclear reactions, and these continued until just beyond the cosmic age of three minutes. The gross nuclear structure of the universe was then left, as it remains today, at a quarter helium and three-quarters hydrogen. It was far too hot for atoms to form around these nuclei, and this would not occur for another half a million years or so. By then the universe had become cool enough for matter and radiation to separate. The world suddenly became transparent and a universal sea of radiation was left to continue cooling on its own until, fifteen billion years later, and by then at a temperature of 3oK, it would be detected by two radio astronomers working outside Princeton—a lingering echo of those far-off times.

Gravity is the dominant force in the next era of cosmic history. It continued its even-handed battle against the original expansive tendency of the big bang, stopping the universe from becoming too rapidly dilute but failing to bring about an implosive collapse. Although the early universe was almost uniform in its constitution, small fluctuations were present, producing sites at which there was excess matter. The effect of gravity enhanced these irregularities until, in a snowballing effect, the universe after a billion years or so, began to become lumpy and the galaxies and their stars began to form.

Within the stars nuclear reactions started up again, as the contractive force of gravity heated up the stellar cores beyond their ignition temperature. Hydrogen was burned to become helium, and when that fuel was exhausted a delicate chain of nuclear reactions started up, which generated further energy and the heavier elements up to iron. The elemental building blocks of life were beginning to be made. Every atom of carbon in every living being was once inside a star, from whose dead ashes we have all arisen. After a life of ten billion years or so, stars began to die. Some were so constituted that they did so in the dramatic death-throes of a supernova explosion. Thus the elements they had made were liberated into the wider environment and at the same time the heavier elements beyond iron, inaccessible through the burning of stellar cores, were produced in reactions with the high-energy neutrinos blowing off the outer envelope of the exploding star.

As a second generation of stars and planets condensed, on at least one planet (and perhaps on many) the conditions of chemical composition, temperature and radiation were such that the next new development in cosmic history could take place. A billion years after conditions on Earth became favourable, through biochemical pathways still unknown to us, and utilizing the subtle flexible-stability with which the laws of atomic physics endow the chemistry of carbon, long chain molecules formed with the power of replicating themselves. They rapidly gobbled up the chemical food in the shallow waters of early Earth, and the three billion years of the history of life had begun. A genetic code was established, a biochemical alphabet in which the instructions for terrestrial life are universally spelled out. Primitive unicellular entities transformed the atmosphere of Earth from one containing carbon dioxide to one containing oxygen, thereby permitting important developments in metabolism. The process of photosynthesis evolved, the method by which the sun’s energy is trapped and preserved for the maintenance of all living beings. Eventually, and then with increasing rapidity, life began to complexify through a process which certainly included the sifting of small variations through the environmental pressures of natural selection. Seven hundred million years ago, jellyfish and worms represented the most advanced forms of life. About three hundred and fifty million years ago, the great step was taken by which some life left the seas and moved on to dry land. Seventy million years ago, the dinosaurs suddenly disappeared, for reasons still a matter of debate, and the little mammals that had been scurrying around at their feet seized their evolutionary chance. Three and a half million years ago, the Australopithecines began to walk erect. Archaic forms of homo sapiens appeared a mere three hundred thousand years ago, and the modern form became established within the last forty thousand years. The universe had become aware of itself.

Such, in outline, is the story that science tells us about the history of the world. There are some speculations (particularly in the very early cosmology) and some ignorances (particularly in relation to the origin of life), but there seems to me to be every reason to take seriously the broad sweep of what we are told. Theological discourse on the doctrine of creation must be consonant with that account.

Of course, the first thing to say about that discourse is that theology is concerned with ontological origin and not with temporal beginning. The idea of creation has no special stake in a datable start to the universe. If Hawking is right, and quantum effects mean that the cosmos as we know it is like a kind of fuzzy spacetime egg, without a singular point at which it all began, that is scientifically very interesting, but theologically insignificant. When he poses the question, “But if the universe is really completely self-contained, having no boundary, or edge, it would have neither beginning nor end: it would simply be. What place, then, for a creator?” it would be theologically naive to give any answer other than: “Every place—as the sustainer of the self-contained spacetime egg and as the ordainer of its quantum laws.” God is not a God of the edges, with a vested interest in boundaries. Creation is not something he did fifteen billion years ago, but it is something that he is doing now.